Current awareness ranges from looking for information on specific topics on a regular basis (and this usually involves the assistance of your Personal Librarian to help you set up your search profile) to embracing a wider, more general, and cross-disciplinary view that brings an element of serendipity into your search for the latest information.

Informally, researchers remain alert in all contexts for useful information and insights that will inform their daily practice, their research and spark off innovative and creative ideas for new avenues of research.

Subscribe to this LibGuide by clicking on the link to the RSS Updates above. You may choose to subscribe to updates for this page only or to updates for the LibGuide as a whole. This saves you having to remember to visit us to see next month's Current Awareness updates.

March websites of the month are:

This monthly post will note special dates and themes, and draw your attention to possibly interesting cross-disciplinary topical references intended to inform and to inspire ideas for research. 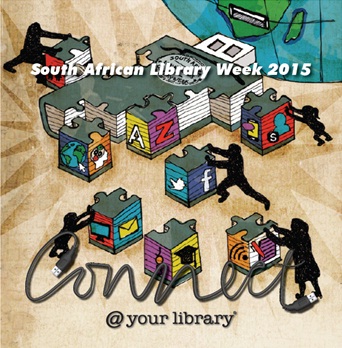 The theme “Connect @ your library” resonates with the belief that libraries connect people to each other, to knowledge and information, to print and electronic resources, to technology and professional support.

Libraries are fast emerging as technologically enabled environments, which provide individuals the opportunity to connect to:

Evacuations as fire rages in Cape Town - A number of fires are burning in Cape Town's south peninsula areas, having been fuelled by strong winds. Follow News24's live updates of the situation as it unfolds.

Should you wish to look back and find something you remember being posted here, visit the Archive to find what you are looking for.

Do not hesitate to contact us if you cannot find what you are looking for.

Framed communities : translating the State of the Nation
Journal Title: Stellenbosch Papers in Linguistics Plus , Vol 43
Pages: 103-126
Authors: Janse van Rensburg, Thelme, Feinauer, Ilse
Published: 2014
Abstract
The South African President delivers a State of the Nation Address every year. In this speech he conveys his opinion on the current state of affairs in the country. Since it is impossible for the President to accommodate all 11 official languages of the country, most of his speech is given in English. A few weeks after the Address, the speech is translated into all 11 languages and can be viewed on the Government's official website. Unfortunately, by that time the Address is considered old news. The country's different media channels report extensively on this speech. These reports can, however, be regarded as much more than simple commentaries on the speech - they are in fact reframed and rewritten versions of the speech that affect, shape and sustain the opinions and ideologies of their readers. These media channels also provide the vehicles through which common links can be established between supporters of the same media to reinforce their belief that they form part of an established community (Bielsa and Bassnett 2009:33). In situations where communication is present or necessary, it is impossible to escape the process or effect of framing, as framing implies "'how speakers mean what they say'" (Tannen and Wallat 1993:60, in Baker 2006:105). Therefore, the presence and effects of framing should never be ignored. In the case at hand, it is through rewriting the President's speech to fit the framework of the particular media channel that framing takes place. Baker (2006:3) supports the integral role framing plays in (intra- or interlingual) translation by introducing the idea that the translated and reformulated narratives that we are exposed to on a daily basis constitute the everyday stories that shape the way we perceive reality. Therefore, it is vital to investigate this process and how it affects both the target text and the target readership. In this exploration of rewritings of the State of the Nation Address, the researchers focus on three different South African publications, and how each uses the same source text to create vastly differing target texts. By catering for their target markets, these publications maintain or shape a specific point of view; by focusing on specific parts of the source text that would interest their readership, they, at the same time, only expose the readers to these sections of the speech, and subsequently frame the readers' perception of the Address, the President, and ultimately, their country.